TICA manufactures parts for the North American car air-conditioning compressor. TICA is located next to TD Automotive Compressor Georgia, LCC (TACG) in Pendergrass,  allowing the company to leverage synergies between the two operations. The TICA plant manufactures the main parts of automotive compressors currently being imported from Japan and assembled at the TACG facility. The TICA plant allows parts that were once manufactured in Japan to be manufactured in Georgia and conveyed directly to TACG and also shipped to Michigan Automotive Compressor, Inc (MACI).  TICA was established in 2012 and the plant officially began mass production in September of 2013. In addition, TICA started production of DC-AC inverters for automobiles in November 2020. We would like to continue to expand our electrical products in North America. 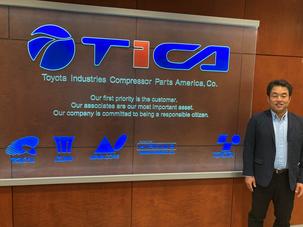 Hello, my name is Haruyuki Ito and I am the President of Toyota Industries Compressor Parts America, Co (TICA).

With growing environmental consciousness in the North American automotive market in recent years, the demand for variable-displacement type compressors with excellent fuel efficiency has been increasing. Therefore, TICA was created to expand Toyota